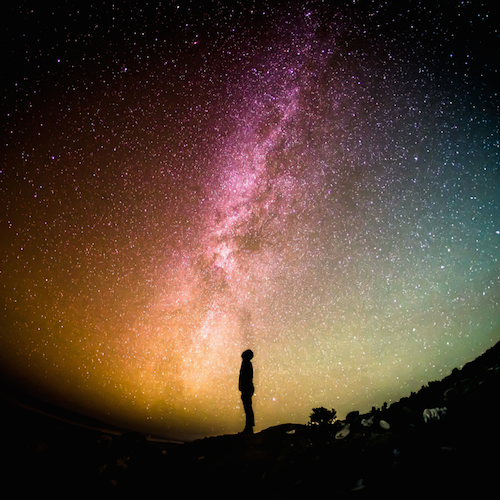 Christmas has come and gone and it’s that time of the year where well… you don’t really know what time of the year it is. Do the days between Christmas and New Year even count? It’s Thursday afternoon and I still haven’t quite made it out of bed. After tackling the boxing day sales I’ve begun hibernating (amongst a mountain of leftover x-mas food and 3 Toblerones).

Anyway, I’m sure you’re all aware of the notorious ‘like‘ button on Social Networking and today I’ll be exploring the depths the nation will delve into to receive a ‘like‘ or ‘double tap’ online and what effect this obsession has.

Before we continue, it’s worth checking out this ep of Black Mirror. If you haven’t yet heard of the series, it’s out on Netflix.

She tweets whilst sat around a dinner table, surrounded by all the ‘girls’, not one of them speaking. Did the first ‘like‘ or ‘favourite’ make her feel a little better about herself? Most likely. Social Media has the ability to create a false sense of reality allowing users to generate online profiles essentially displaying any life they wish to. Networks such as Instagram flourish on buff bikini bods, delectable food dishes and billions of big-budget holiday scenes. I’m sure I’m not the only one who has scrolled through their Insta feed and spent the next hour depressed, wondering if eating the last doughnut was a good idea.

With social media’s usage levels continuing to climb,  huge amounts of content are generated each year. The internet alone caters for a whopping 3.17 users worldwide with 2.6 billion of these being social media users.

With staggering statistics like this, it’s not a surprise that the world has become obsessed with likes…but likes aren’t real! Or are they? We live in a society where social popularity could potentially be based on the amount of ‘double taps’ you’ve received on your selfie. Although I hate to admit it, there is always some kind of self-gratification when receiving likes on Instagram. It’s easy to become obsessed with likes. Facebook introduced their like button in 2009 and after 7 years it’s difficult to imagine what Facebook would be like without it’s infamous ‘like‘ button.

WHAT WOULD WE DO WITHOUT IT?

Well, probably nothing. It’s not as if we would immediately drop dead without a ‘like‘ but the world has become obsessed.

“You get an emotional high when posts hit a responsive chord with your audience, so you keep going after that, and you’re never fulfilled because you always want more likes,” – Susan Krauss

A huge number of people will physically remove themselves from fun activities JUST to post a status update or craft a perfect pic that will accumulate a couple of extra ‘likes‘ or comments on social media. In
fact, in a lot of cases, people will often risk their own safety for social media. People are dying for a selfie, literally. Take a look at some of our most recent headlines.

With technology becoming just as important as food these days, kids by the age of 13 are divulged in fake realities, expectations and pressure to be popular online.

Children and young adults become exposed to an online world packed with unrealistic representations of what ‘likes‘ actually mean. Young teenagers shouldn’t be concerned about hitting the prestigious ’11 likes‘ on Instagram, or loose sleep over the thought of having under 100 friends on Facebook. Teaching children that worthiness and popularity come in the form of ‘likes‘ or looking good online will only snowball into a huge array of self-esteem and confidence issues.  The Dove Self-Esteem project found that two-thirds of women felt they were ‘prettier’ online than in real life. 60% of university age students admitted social media had a negative effect on their confidence. Phew. I’m not the only one. 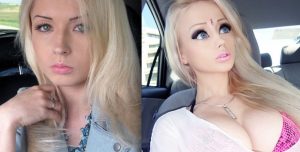 A prime example of the power of social media. Stereotypical representations of women and men are plastered across all platforms of social media every single day. If these images are constantly showered with praise in the form of likes it’s not a surprise young girls like Valarie Lukyanova felt the urge to radically change her image. Shame. Social media has stolen the innocence of growing up.

Taking matters into my own hands, I’ve conducted a little Google search experiment. 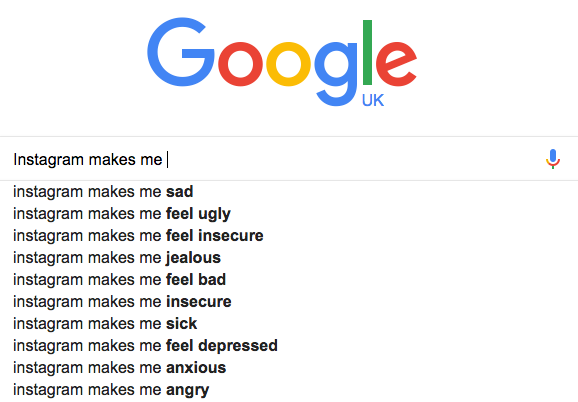 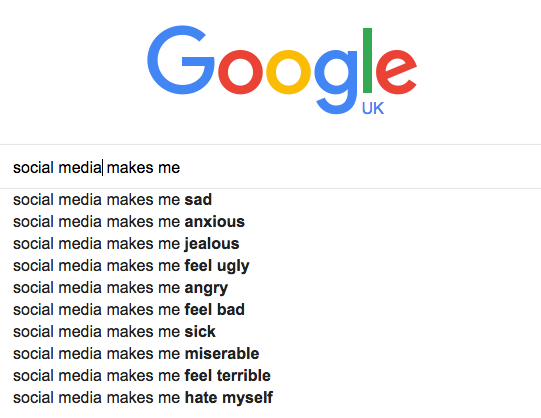 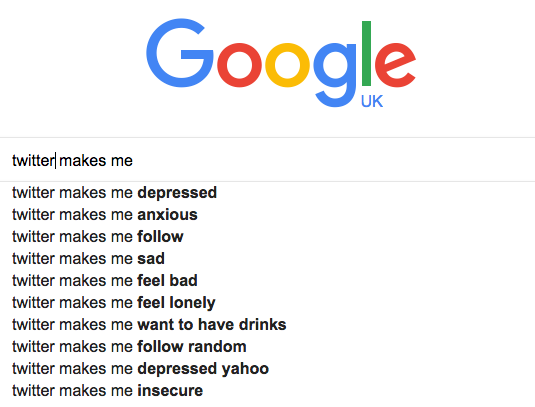 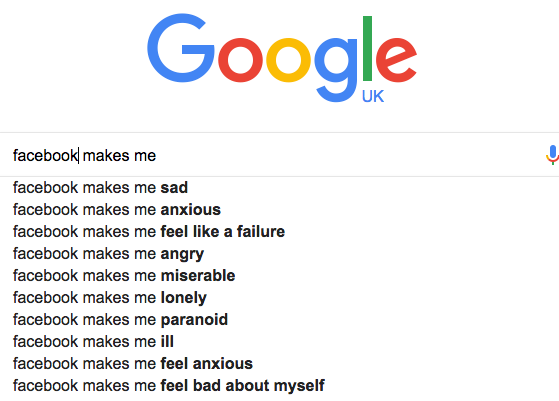 Let’s zoom out and look at the bigger picture, (pun intended). Instagram accounts only show the images account holders wish to show. Realistically, no one is going to post the ‘bad pics’ (aka the 6 am selfies when absolutely obliterated) from Ibiza 2016, they are going to show the picture with the most flattering lighting, angelic backdrop and deceiving filter.

Whether is Claredon, Juno, Lark or Ludwig, Instagram filters mask the truth.

“When was the last time you closed your eyes to really see what someone was going through, read between the cryptic lines to understand someone else’s plight? Far too often we take those moments captured on Instagram and formulate conclusions that that person is doing well, but in all honesty, who’s really going to post a picture of them in the struggle?” – Erica Harris

Talking about perceptions, how much information would you post online about your personal life? Social media seems to know more about me than I know about myself these days. My next discussion will be following up the idea of privacy. Has social media banished privacy too?

Until next time folks…